The Nashville region is experiencing unprecedented growth in jobs, construction and housing. But that growth comes with a cost: traffic congestion. According to research by the Texas Transportation Institute, the Nashville region ranks 11th out of 101 metros in annual congestion cost per commuter. That means we’re paying more than nearly every other major metro in the country. The U.S. Census Bureau's 2013 American Community Survey reports that the average Nashvillian's morning commute is 26 minutes and 30 seconds, and research from the 2014 Nashville Region’s Vital Signs report shows commute times are increasing. These additional costs and traffic delays negatively impact our productivity, economy and quality of life, and we must make long-term transportation solutions a regional priority.

Today, the Chamber announced a new initiative called Moving Forward: Transit Solutions for Our Region, whose key aim is to break ground on a rapid transit project by 2020. Moving Forward will involve business and community leaders, elected officials and stakeholders throughout Middle Tennessee to identify funding sources for transit projects, target areas where transit is most necessary, and ultimately transform our transit landscape.

Moving Forward will be guided by a coordinating committee, chaired by Bridgestone Americas President and CEO Gary Garfield. Avenue Bank Executive VP Pete Wooten will serve as vice chair. In addition, the initiative will include three community-led task forces focused on revenue and finance, routes/network and modes, and public engagement.

Middle Tennessee lags behind many of our peer cities in this critical area. If we expect to maintain our growth and prosperity, it's essential to address our transportation challenges in a way that connects our communities and makes it easier for residents to move throughout our region. 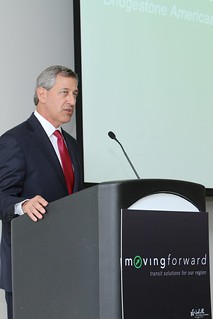 Moving Forward Chair Gary Garfield, president and CEO, Bridgestone Americas, provides an overview of the new initiative during the launch. 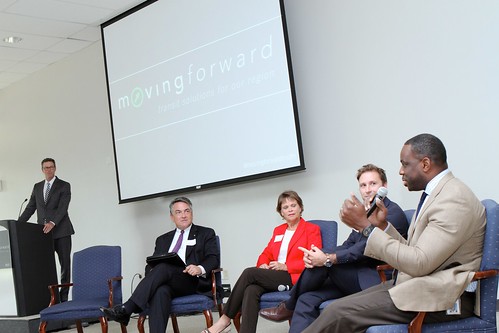 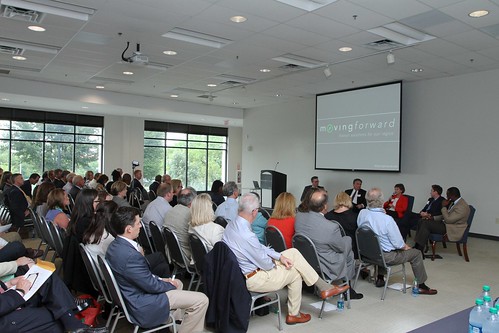 Business and community leaders from throughout Middle Tennessee listen to a panel discussion during the Moving Forward launch.