VIP guests reported enthusiastic feedback about the student ambassadors who led the tour groups, as well as the leadership of Executive Principal Darren Kennedy and his team, and the school's business and community partners. “The building is so clean, and I love the college wall. I’m sure your students appreciate the way their school looks,” one VIP told Kennedy after the tour.

“The academic culture of McKissack is clearly changing. I was so fascinated with the catapults I saw in the STEM classroom," said another attendee.

McKissack's student population is 357; the school's student-teacher ratio is 20 to 1. For the 2015-2016 academic year, McKissack added art, STEM and Spanish classes to their offerings. Students also have several opportunities to get a head start on earning high school credit. McKissack's mission statement is to provide every student with a safe learning environment that is focused on continual academic growth and gains.

“There are so many things going on in the building," said another impressed guest. "As I sit here and listen, my first thought is, How are they doing all of this?” 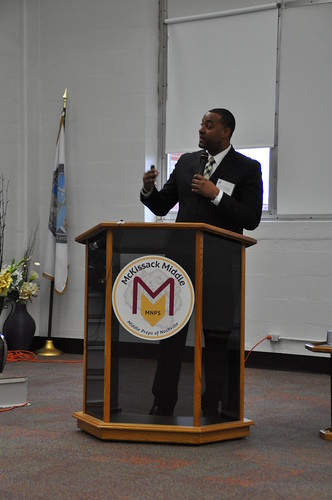